Invites you to the talk Re-constructing Precarity:  Anxieties of Swedish Queer Film Festivals by Siddharth Chadha

(Media and Communication Studies at the Department of Informatics and Media, Uppsala University, Sweden)

LGBTQ politics in Sweden is treading a potholed road. Queer communities are reaping the socio-political benefits of a successful struggle against criminalization of sexual practices, pathologizing of gender dysphoria, non-recognition of same sex partnerships etc. Yet, the community continues to suffer from discrimination and marginalization within the heteronormative society. Broadly speaking, within political theory, the LGBTQ movement is characterized as a ‘universal’ political struggle constructed on the grounds of gender and sexuality. However, a less discussed topic are its internal threats and dislocations produced through competing claims and articulations of ‘particular’ identities. This paper reports on the ethnographic research conducted at the Malmö Queer Film festival (MQF) and the Cinema Queer Film Festival, Stockholm (CQF) in Sweden between 2016- 2019 to discuss how the competing claims of particular identities are negotiated, represented and repressed at the festival. Within the unique context of Sweden, a post-rights regime for LGBTQ persons, the queer film festival emerges as a site where queer bodies are discursively re-articulated. Using the framework of discourse theory (Laclau and Mouffe 1985), the presentation critically analyses the precarities which are made visible in the discursive construction of the MQF and CQF, while also emphasizing the need to study unarticulated identity positions absent at the festival. Further, through a psychoanalytic reflection, the paper theorizes the limits of identity politics as determined not only through the external category of fear but also its internal neurotic anxiety generated through the dislocatory effects of identity claims.

Siddharth Chadha is from the Media and Communication Studies at the Department of Informatics and Media, Uppsala University, Sweden. He works on 'Radical Queer Constructions: A post-strucutralist inquiry of LGBTQIA+ movement in Sweden'. His research interests are post-structuralism, discourse theory, psychoanalysis, political participation, LGBTQIA+ film festivals. Alongside his academic work, Siddharth is an independent filmmaker and a community media practitioner. 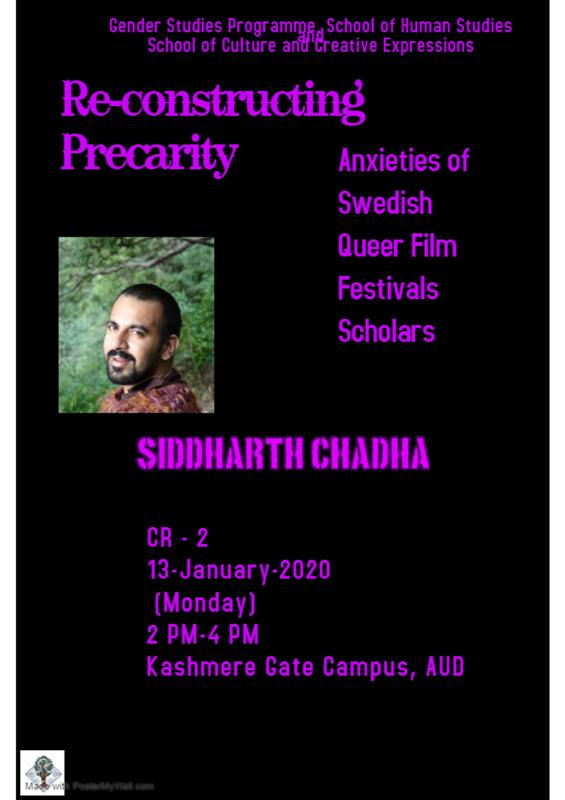