As part of the sociology seminar series, you are cordially invited to a talk by Dr James Bradbury University of Manchester

Abstract:The expanding influence of Hindu nationalism in contemporary India has come hand-in-hand with the collapse of two out of the country’s three communist-led state governments, raising questions about the relationship between Indian Marxists and the Hindu contexts in which they operate. This relationship is explored here through an ethnographic case study of the parliamentary Communist Party of India (Marxist) or CPI(M) in West Bengal – a state which was ruled by the CPI(M)-led Left Front coalition from 1977 to 2011 but which has seen strident gains for the Hindu right-wing Bharatiya Janata Party (BJP) in recent elections. The paper accounts for the communists’ failure to articulate a relationship between Hinduism and the Marxist Left in contemporary India. The CPI(M)’s secularist doctrine, which stipulates a strict separation of religion and politics, renders the many negotiations between religion and politics as they emerge through everyday political practice invisible or unspeakable, and thus forecloses the possibility of a Hindu Left in the contemporary political landscape. Casting light on this impossible relationship reveals engagements between Hinduism and Indian Marxism which may challenge the dominant manifestation of religious politics in South Asia as religious nationalism and identify emergent grounds of left-wing, secularist politics in the region. 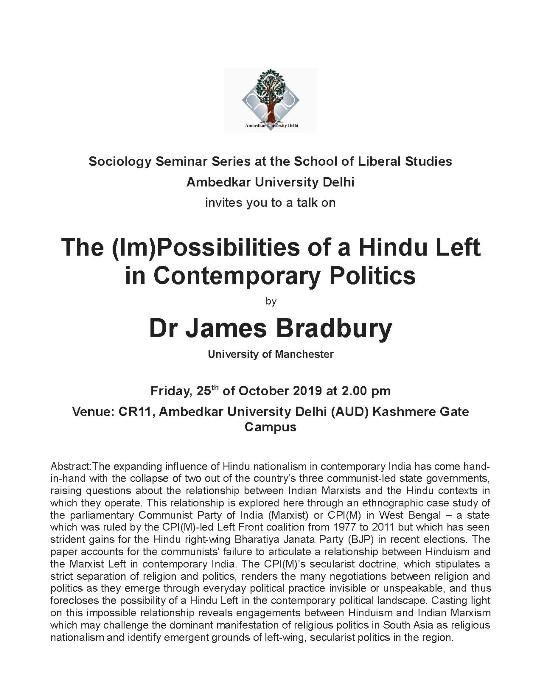