»AUD Events»Invites: TALK on Impossibility of being Queer at the Time of Homonationalism and Pink-washing

Abstract: This paper focuses on how a fiction is being constantly constructed regarding the safety of sexual minorities in the United States by citing Islamic homophobia – simply put, Islamic migration to the United States is being resisted on the grounds that the migrants would prove to be a major threat to the safety of sexual minorities. This is technically called 'pink-washing' which is being endorsed by conformist white queer Americans who are unabashedly holding rally with banners that scream- ‘Muslims are the problem’. This fiction is further reinforced by a strategic policy of the US to mark out the Jewish nation of Israel as a queer paradise, highlighting by contrast the pathological homophobia of its Islamic neighbours in the Middle East. Israel’s projected queer friendliness is coterminous with its antagonistic attitude to Palestine – both being excellent political ploys to reinforce its friendship with the U.S. Dissident voices have been raised against this dangerous alliance between the US and Israel, in which, the protection of sexual minorities, who are perceived to be at the receiving end of Islamic homophobia, are being used as a pretext to justify the promotion of Islamophobia. The paper will discuss this very complex phenomenon drawing a theoretical framework from Jasbir Puar’s path-breaking work Terrorist Assemblages: Homonationalism in Queer Times (2007) and its subsequent impact on understanding this politics of homonationalism which began to gain tremendous currency since the 9/11 incident, although it has a longer history behind it. In the current Indian scenario, the overemphasis on Hindu mythology in the transbill, and a certain section of transactivism claiming rights couched in a disturbing rhetoric of overt religiosity underscore the upsetting turn queer activism is taking in the country. Although such a turn was not unexpected, what emerges as threatening is a clear fragmentation of the queer movement along ideological lines, with an aggressive homonationalism making its upsetting presence felt. 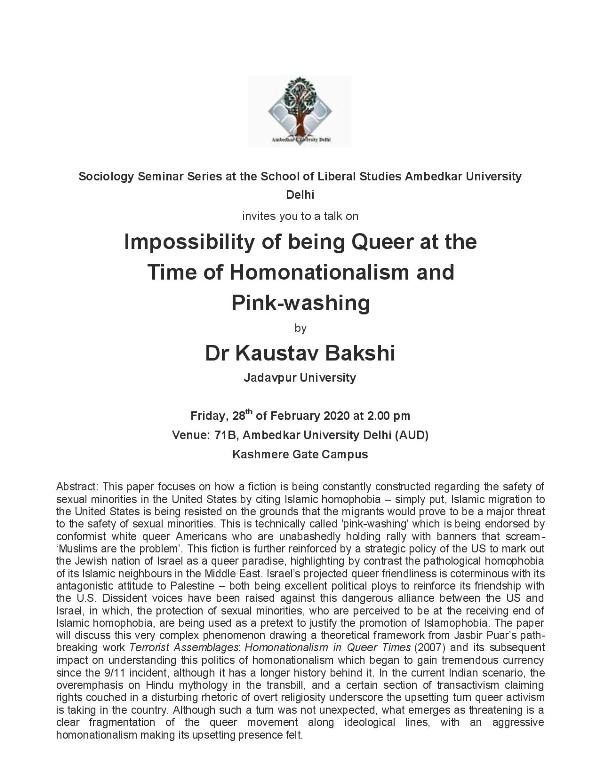