Invite you to a Book Discussion on Election Commission of India: Institutionalising Democratic Uncertainties

Authors in conversation with students of AUD

Followed by Open House led by:

Responding to a pressing need for a focussed study of India's public institutions, Singh and Roy put together the first comprehensive monograph-length study of the Election Commission (EC) of India. They probe the consistent credibility that the EC enjoys as a non-partisan constitutional body entrusted with the responsibility of conducting elections in India. The EC is generally seen as a regulatory body which enforces rules to conduct elections effectively and efficiently. The authors argue that the EC must be seen as performing a range of functions, not all of which are regulatory. The EC is actively engaged in framing and implementing rules to ascertain procedural certainty in order to ensure the democratic principle of uncertainty of electoral outcome. Innovations in conducting elections which are often seen through the lens of electoral 'management' and 'electoral integrity' have become part of the deliberative content of elections. The work also examines the relationship between the legal-institutional frameworks of electoral governance within the larger institutional matrix of democracy, and the political field in which they are located. The latter, the authors argue, both limit and enable the effectiveness of the EC in the shared space of democracy in India. See here: https://india.oup.com/searchresults?searchbox_input=Election%20Commission%20Of%20India

Ujjwal Kumar Singh is Professor in the Department of Political Science in the University of Delhi. He has been writing on a range of themes including democracy and social movements, law and democracy and political institutions in India. He is the author of the books Political Prisoners in India; and The State, Democracy and Anti-Terror Laws in India, has co-edited Towards Legal Literacy: An Introduction to Law in India and Human Rights and Peace: Ideas, Laws, Institution and Movements. His articles have appeared in several national and international journals. He has been a visiting fellow in universities in India and abroad.

Anupama Roy is a Professor at the Centre for Political Studies in Jawaharlal Nehru University, Delhi. Her research interests straddle legal studies, political anthropology of political institutions, political ideas, and gender studies. She is the author of the books Gendered Citizenship: Historical and Conceptual Explorations, and Mapping Citizenship in India, and has co-edited Poverty, Gender and Migration in South Asia. Her most recent publication is the Oxford India Short Introduction to Citizenship in India. Her research articles have appeared in various national and international journals and she has been a visiting scholar in universities in India and abroad. 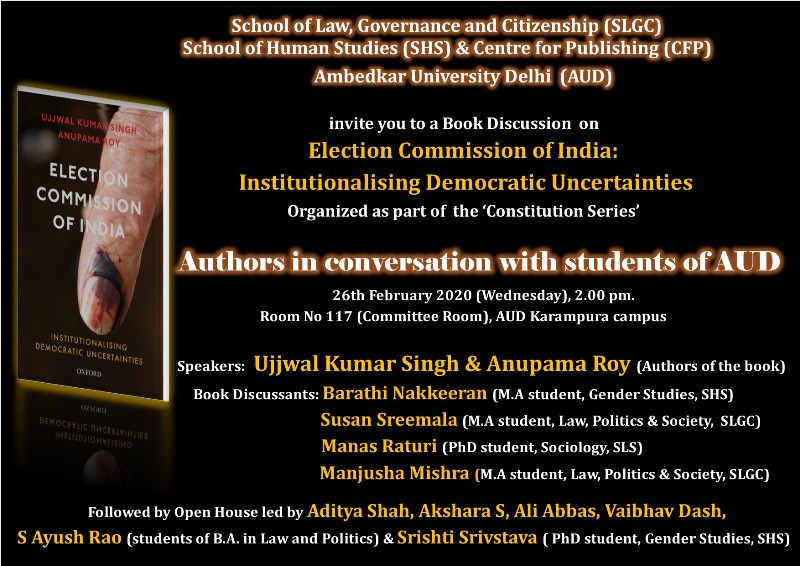