History Society, Ambedkar University Delhi invites you to an interactive session with Swadhin Sen on Rethinking the Archaeology in Historical Discourses on `Early Medieval/Medieval’ South Asia

Is the relationship between the archaeology and history in South Asia assumed as taken for granted? Since the colonial formation, in spite of both the disciplines multifaceted transformations, the accepted view is that archaeology is a sub-discipline of history, or it is widely believed that archaeology is merely a source of data regarding the `periods’ which are defined by the absence of textual and epigraphic records. For the periods that are defined and debated as `historical’ with the dominant presence of texts, coins, and epigraphs, or sometimes, monumental remains; archaeology is unquestionably considered as complimentary. Archaeological data is treated as an auxiliary for the support of the textual (and epigraphic) sources and discussions based on it. The objectives of this lecture are not to assert the superiority or the independence of archaeology as a discipline, or to dissociate archaeology from history, but to show that the formation of disciplines has a historical context. The relationship among disciplines has formed and reconfigured within traditions of knowledge despite the claims of blurred boundaries among the disciplines. Indeed, archaeology has its own disciplinary histories, concepts, and methods. I intend to show that accepted and institutionalized historical periodization could be unsettled and problematic in archaeological discourses and practices. These problems become more evident for the studies of the `periods’ which are often regarded as the domain of `historical archaeology’ by the archaeologists. By providing examples from our archaeological researches in undivided Bengal and particularly in the northwestern part of Bangladesh, I engage with the timeframes that are defined as early medieval and/or medieval by historians. These `periods’ have become significant for us because of their persistent presence in various discussions and debates in historical narratives of South Asia. The aim is to question the uses of sources and data in these debates and consequently, analyze the ways in which archaeological data have been incorporated (and rejected) in historical writing without any considerable engagement with the archaeological concepts and methodologies of retrieval, description, and analyses. At the same time, an attempt has been made to show how analyses are accepted without any critical evaluation of the data provided by scientific analyses. The enormous significance of considering the nature and context of archaeological data, the transformation processes, and its scopes and limitations have largely been ignored and consequently, have influenced the historical scholarship in many ways. History writings on the aforementioned periods have profoundly been dominated by epigraphic sources, essentially royal and elitist in nature, and textual sources that have gone through changes through time. In these historical writings, the archaeology is regarded mostly as a source of data on urban centers or on monumental remains of religious establishments like Buddhist monasteries, temples, mosques, etc. The methodology of excavation or archaeological surveying, the importance of landscape, and the significance of the ecological archaeology have hardly been referred to. The hinterlands and the landscape (i.e. rivers, tanks, water bodies, landforms, forests, etc.) and acknowledgment of a wider nature of archaeological data (e.g. tanks and embankments in water management and political control or pottery in understanding the ordinary living) may be useful to rethink many narratives of accepted history writing. Finally, I propose that archaeology of the regions like Bengal or Bangladesh has traditionally been generalized in reference to the standards set in northern and western India. These generalizations can be futile for our understanding of particularities and differences. 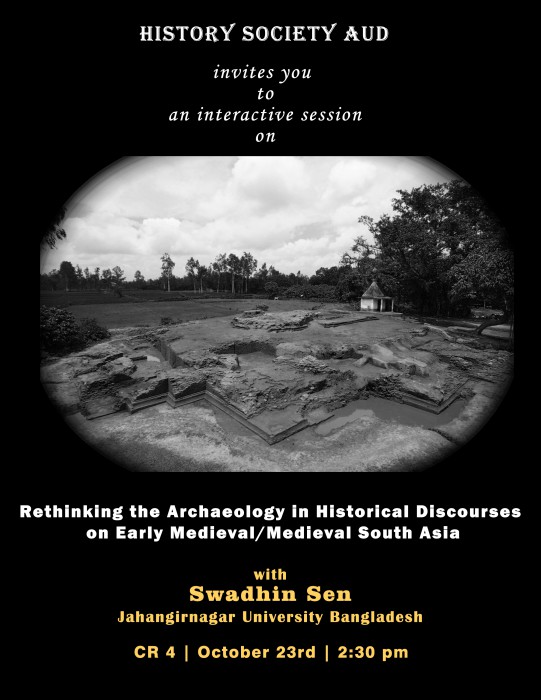