The last date to apply online for UG Programmes has been extended up to 30th September 2021.

India entered a new phase in 1991 with adoption of the structural adjustment programme. Several studies since have tended to focus on global and national factors to understand ongoing political processes. With cultural nationalism and symbolic politics holding the media attention, the significant transformation of India’s political economy has been under researched despite its contribution to victory of Bharatiya Janata Party (BJP) in 2014 elections and the changing nature of Indian state. The argument made here is that India after liberalisation cannot be regarded as a continuous period as far as its political economy is concerned. In fact, an assessment of the political settlement operating in states of Chhattisgarh, Gujarat and Karnataka bring back role of subnational actors, particularly classes in shaping policies which in turn shape classes. A peculiar combination of dominant class and state relation emerge in these three cases which play a decisive role in how their politics and economy have advanced since. The academic reference point for the study was Pranab Bardhan's 3-proprietary classes and evaluating its relevance in new India. The form of research was adopted from Atul Kohli’s book, The State and Poverty in India. The three classes hold significance but in a different way. The agrarian policies as discontinuous with 2004 elections being that moment when the Bharatiya Janata Party learns a critical lesson from its loss of power at the Centre. Big farmers reassert their presence in Indian politics as agrarian policies in the phase after 2004 show in the regional states where BJP was ruling. These policies and land acquisition policy open new set of opportunities for the class transforming their class character. The other two dominant classes are industrial class which holds the most powerful position and the ‘petty bourgeoisie’. Following Mushtaq Khan, the class encompasses the changes in class formations and consolidations experienced under economic reforms, particularly by the agrarian classes. New and old petty bourgeoisie have been identified to comprehend changes on ground. The urban-rural divide stands narrowed so does the gap between the two dominant proprietary classes---big farmers and industrial class owing to the third class. The conclusions are based on inductive methodology. The fieldwork covered 140 interviews conducted across 23 districts of India. 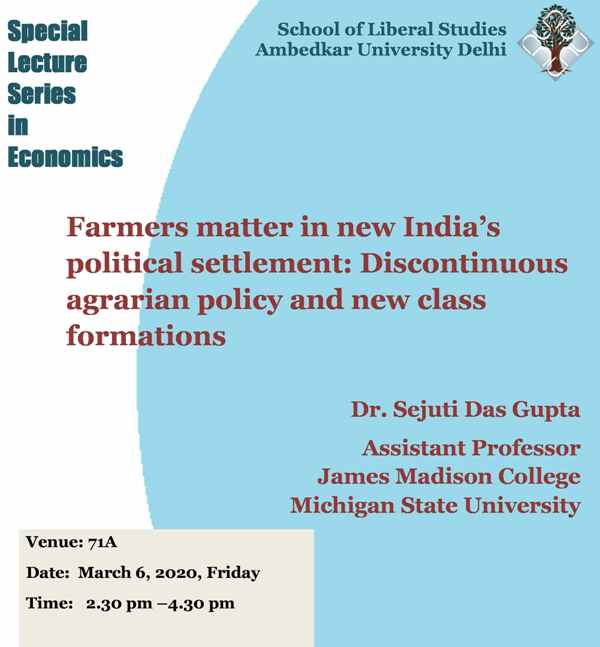