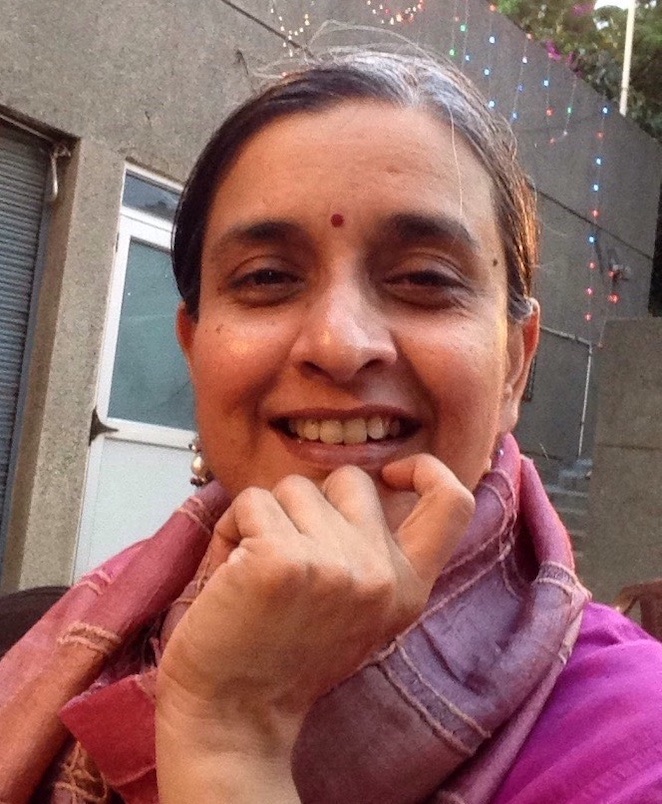 Diploma thesis: Gandhi’s Way – A Study of Communication as if People Mattered

Doctoral thesis: Genesis of Design Education in India – The Warp and Weft of Global-Local Contexts

Design history, sociology and politics of design, design as activism

Curatorial research for the exhibition Bauhaus Imaginista (Chapter- Moving Away: The Impact of the Bauhaus in Asia) to mark the centenary of the Bauhaus Design School (Staatliches Bauhaus – Weimar-Dessau-Berlin 1919-33) in 2019.

Sponsor: India Foundation for the Arts and National Museum, New Delhi held jointly with Abeer Gupta. The project was a year-long engagement with National Museum (Decorative Arts Department) to engage with 80 pieces of brocade from the museum’s collection through research, curation and display. This project was visualized as a live link between the university, the museum and the public and opening of national resources through student research and public participation. The project concluded in an exhibition at the National Museum entitled Atoot Dor/Unbroken Thread: Banarasi Brocade Saris at Home and in the World, which was on view from 25 February to 25 April 2016. The exhibition was accompanied by an illustrated colour catalogue of object displayed in the show.

Research and presentation of module on History of Design for online course “Understanding Design” developed by Industrial Design Centre at IIT Powai, Mumbai, for Open Design School on Swayam Platform of MHRD. November 2017. Grant sanctioned: GBP 8460 – INR 8.46 lakhs This year-long collaboration explored the theme Design and Uncertainty in the Global Present in two workshops, one in May 2014 in London and the other in September 2014 in Delhi. The two workshops examined the ways in which design is drawn into responding, re-imagining and re-shaping the social landscape amid the unfolding challenges posed by an increasingly inter-connected globalised world. Participants included a team of 6 faculty members (three from each institution) and 13 students from RCA and 20 from AUD.

The Design Student Experience at the National Institute of Design
International Forum: When art becomes education, when education becomes art – the past and future of the curriculum of Bauhaus at German Consulate Shanghai, 11 April 2018

Cultures of the City: AUD Neighbourhood Museums in Delhi
Presented at International Winter School at The Innovation School, The Glasgow School of Art, Highlands and Islands Campus, Forres, Scotland on the theme "Alternative values/new economies", January 2018.

Making it Concrete: Imagining and realizing a ‘standard’ of ‘living’ in India after Independence
Presented at Modern Living in Asia conference, Brighton. Via Skype, April 2017

Pedagogy for Social Design Practice at the School of Design, AUD
Presented at the International Winter School at The Innovation School, The Glasgow School of Art, Highlands and Islands Campus, Forres, Scotland, January 2017.

Three reasons why it is time to rethink design pedagogy in India
Presented at seminar  entitled " Inside Future - Future Inside : Practice, Pedagogy and Perception of Interior Design" at CEPT University, Ahmedabad, December 2015

The Tangled Web of Religious Caste, Community and Gender Identities: Partition and Gujarat
Presented at Religion in the making of a Region: Perspectives from Gujarat, Conference at Wolfson College, Oxford, July 2010

The Place of Drawing in Design Education
Presented at in 2010 at CEPHAD 2010 – The Borderland between Philosophy and Design Research organized by The Danish Design School, Copenhagen

Beyond Majority-Minority Dichotomy: Impact of the Events of 2002 on the Education of Girls in Ahmedabad
Presented in 2004 at Annual Women’s Studies Conference at Goa

Refocussing Praxis: The Problem for Design Research
Presented in 2000 at an international conference on Design (plus) Research at Milan, Italy organised by Politecnico di Milano.

Protecting Rights of Children in State Care
Presented in 1998 at a seminar on Child Rights organised by UNICEF and the Department of Human Development and Family Studies, M.S. University, Baroda.

Organisation Of Workshops And Seminars

2014
Chaired talk by graphic designer Itu Chauduri entitled “An Uncertain Arc: Impressions of India's Design Century” at India International Centre, February 2014
Organised two workshops, one each in London (May) and Delhi (September), to explore cross-cultural learning on the theme of Design and Uncertainty with multi-disciplinary faculty teams from varied cultural geographies
Mentor at conference What’s Next: Future of Design Education organized by Pearl Academy, New Delhi in December 2014.

2013
Co-organiser with Tanishka Kachru of NID Ahmedabad and Academic convenor of the 36th Annual Conference of the Design History Society, London, entitled “Towards Global Histories of Design: Postcolonial Perspectives” hosted by the National Institute of Design, Ahmedabad, India, 5-8 September 2013

2016
Co-curated (with Abeer Gupta) exhibition Atoot Dor/Unbroken Thread: Banarasi Brocade Saris at Home and in the World, on view at the National Museum, New Delhi from 25 February to 25 April 2016.

Locks, Limes and Charms: Keeping Safe and Feeling Safe in a Modern World
Talk for students at PhD workshop at National institute of Design, 22 May 2018

The Dashavatara: Civilisational Design as a Response to Uncertainty
Talk for students at PhD workshop at National institute of Design, 23 May 2018

The Global Gujarati: At Home in the World
Willingdon Club, Mumbai, February 2017

Design in the Real World: A View from India
Glasgow School of Art, 17 January 2017

The Myth of the Hare and Hounds: Making Sense of a Recurring City-Foundation Story
Nehru Memorial Museum and Library, 2014.

India in the 1970s: A View through Postage Stamps
Haifa University, Haifa, November 2013

Dung: The epistemology of absence and presence
Royal College of Art, London, November 2013