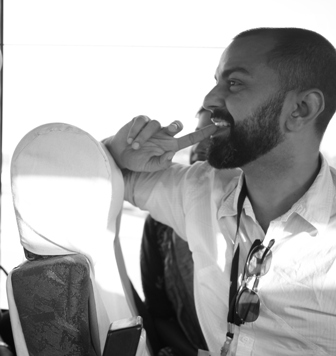 Mandeep Raikhy is a dance practitioner with a particular interest in exploring the intersections between dance creation, performance, research and pedagogy. He began studying jazz at age 19 at the Danceworx, New Delhi, and his subsequent interest in contemporary dance took him to London where he completed a BA (Hons) in Dance Theatre at Laban. He undertook his first tour with Shobana Jeyasingh Dance Company, London and has toured with their annual productions between 2005-09.  He was also part of the company’s education team and has extensive teaching experience. He is currently pursuing a Masters in Philosophy from IGNOU.

Since 2010, Mandeep has created several dance works, notably Inhabited Geometry (2010), a male ant has straight antennae (2013) and Queen-size (2016). These works have travelled across the country and internationally over the years including Kampnagel, South Bank Centre and Singapore International Arts Festival. Since 2009, Mandeep is Managing Director at Gati Dance Forum, where he has worked to develop a supportive environment for contemporary dance in the country through projects as diverse as curriculum development, residencies, festivals, publications, pedagogical and advocacy initiatives.

"The performance, the mood, the sounds and smells, not to mention the light distilled through sheer goblets of water create an intimate groove in time where you smile and shiver, gaze and dive into the most personal and magical zone of two male lovers that also remind you of moments in your own sojourns into the realm of desire." Bangalore Mirror, 2017

“The queer gaze that the last moments of the performance successfully put forth unshackled the performance from its performativity by making it an act that we happened to encounter—we became watchers on the same ground as the performers." Sheetala Bhat, Ligament.in Vol 2  Issue 6 - An online magazine on contemporary movement arts

“Watching two men, two human beings enact an activity so natural, but otherwise taboo, might just be the show we require to question our own perception of sex, sexuality and gender.” Deborah Cornelious, The Hindu (9 December 2016)

a male ant has straight antennae

"Raikhy believes his job is to string together a narrative logic without telling the audience any one linear story through dance" Artists at Work, Live Mint, 2015

“... raises and responds to this question (of masculinity) far more effectively through movement than could be possible in words... enthralling piece!” Open Magazine, 2013

“... one of the strongest and the wittiest works of the Dance Marathon...." Business Times, Singapore, 2015

“... Mandeep Raikhy excels in blurring traditional Indian dance styles with contemporary Western dance forms, taps on the classical vocabulary of Bharatanatyam and delves deeper into the study of the relationship between these two diametrically opposite styles of dance, bound by a slender thread.” BUZZ IN TOWN on Inhabited Geometry, 2011

June 2017: ‘Contemporary’ as a Lens of Criticality
Marg Foundation, Special Issue on Dance